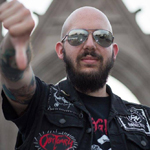 March 19th, 2018 – Greetings and salutations, children of technology! This is the first edition of ASSCHAPEL OF GHOULS. JS had approached me about writing some reviews of recent metal releases some time ago. Why? I dunno. Probably because I spend most of my time on facebook complaining about metal anyways. Regardless, I’m happy to oblige, and hope you get some sort of satisfaction out of this, dear reader. Unfortunately, there isn’t that much music I’m going to be too savage towards for this batch. Unless I’m asked to review something the elle 2.0 horde knows I will hate, I likely won’t. Life’s too short to waste time on crap you know you’re gonna hate. These ‘reviews’ are all hot takes of something I’ve listened to <3 times. So, take that for what it’s worth when entering the realm of chaos. Enough about me. Let’s talk about the finer things in life. Metal.

Altarage “Endinghment”
I’ve seen this band’s name dropped a lot the last year or two amongst cult (fuck your kvlt, poser. have some self-respect) death metal fanatics on most available orifices on internetland. This is more atonal dissonant death metal that’s technical without being wanky, and still maintains that eerie ominous feeling of those classic records we haven’t gotten tired of. For my money, this is good. I’m not blown away like I was hoping, and some parts are a little too ‘modern’ for my tastes. Competently played with some strong ideas. I just want some more grease on my burger. But overall, if you’re into bands like Portal, Abyssal, Blood Incantation, and Chthe’ilist you’ll be in good hands. 4/5 crushed beers.

Tribulation “Down Below”
This band is billed as some sort of rock ‘n’ roll/goth version of black metal. Cool. I like Craft and Carpathian Forest. But no. This is not what we have here. This is some sort of riffless dad rock with black metal vocals. A lot of people love Tribulation. I don’t get it. Who the hell does this appeal to? All I can envision mentally is some balding dipshit in a pirate shirt at some bar where he’s 20 years past the median age nice guying that cute girl as she sips her cocktail surrounded by the acrid air of desperation and premature ejaculation. That’s the target audience, i guess. There are no riffs to be found. No interesting harmonies. Just some middling Peter Frampton by way of Jon Nodtveidt black metal/rock. I have to listen to Nifelheim now to rid myself of these losers precum that permeated my ears. 2/5 crushed beers.

Dodecahedrom “Kwintessens”
Whoa buddy, I was not expecting this! The prospect of ‘avant-garde black metal’ is a slippery fucking slope. Thankfully, this exceeds on every level. Like if Deathspell Omega decided to quit acting like The Dillinger Escape Plan, and recorded their coldest and most clinical release to date after hanging with Darkspace. I don’t really have anything else to say, other than I wasn’t expecting to have my head caved in like this. 5/5 crushed beers

Portal “Ion”
If you’ve made it this far, chances are you’ve at least heard of Portal. You either love them or hate them, and I can’t imagine why any fan of ‘extreme metal’ could/would hate them. Anyways, this is their new record. And…it’s fine. The production is crystal clear, guitars are on 6 string tuned to standard (they previously used 8 strings, and tuned it to who knows what). Portal are not known for memorable songwriting; more of curating an unmistakable vibe along with ‘holy shit, what fucking planet are these dudes from?!” kinda deal. Which is why ION is sort of a mixed bag for me. I appreciate and applaud that they’re kinda trying something new, but with such a clear sound, they lose a lot of the aura that makes Portal Portal. There’s moments on here for sure, and I may love this by year’s end. As of now, again, it’s…fine. 3/5 crushed beers.

Druid Lord “Grotesque Offerings”
FUCK. YES. This album is perfect. From the cover art, to the methodical vocal performance, crushing riffs, and funeral harmonies, this is just about everything I want in a metal record. Imagine if Cathedral didn’t turn into a bunch of hippies past ‘Forest of Equilibrium’, hung out with Winter some more, and got ol’ boy from Dream Death to drop his balls a little and bellow hymns of death. My favorite record of 2018 thus far. 5/5 crushed beers

Kommand “Demo 2”
JS had suggested I review this this. It was sold as ‘hardcore hype from the singer of Hoax dropping death metal’. My initial thoughts were ‘Oh, fucking great. Just what the world needs, another Gatecreeper.’ Mind you, I liked Hoax. One of the few hardcore bands past 2000 that actually hit their peak, and didn’t break up after a 7″. Now as for this? This was pretty alright. I was expecting some sort of Stockholm dick swinging, but I got something in between Grotesque, Incantation, and Possessed. I like those bands, so I’m not gonna hate this. Nothing particularly stood out for me, but I had a solid time for about 15 minutes with this. 3/5 crushed beers.

“The Shape of Water”
So, the hype machine was in full effect with this one. Here’s a controversial opinion for all of you; Guillermo del Toro isn’t that great of a director. Sure, ‘Pan’s Labyrinth’ was incredible. The rest of his filmography? Murky at best. This film is the ultimate GDT flick that it plays to both his strengths and weaknesses. Any GDT film will be aesthetically pleasing visually. This is no exception. Every actor in this is on top of their game. My issue? The story. I didn’t buy it. A mute janitor falls in love with this amphibious creature because of boiled eggs and jazz records because they’re lonely? Jesus christ. What 12 year old writes this shit? Don’t get me started on the weird beastiality sex scene. If you’re not emotionally past the age of 15, and want a darker ‘Beauty and the Beast’ this is your flick. Me? I’m a fucking adult. 2.5/5 crushed beers.

“Mayhem”
Some virus that triggers people’s most impulsive desires (sex and violence) is unleashed in some corporate office and Glenn from the Walking Dead is here to set things straight after getting wrongfully fired. A lot of people get killed in violent ways, shitheads are banging everywhere, a babely female protagonists favorite band is Motörhead  (that later gets negated by her wearing a Black Dahlia Murder shirt), and a corpse gets pissed on. This was fun, tho I can do without the contrived broke ass Tarantino dialogue. 3.5/5 crushed beers.

“The Ritual”
Some wimp lets his homie get murked with a machete to the head, and takes a backpack trip through some ominous Swedish forest with a few bubs; only to deal with witchcraft and death afterwards. Some genuinely creepy moments, and a few solid scares. Aside from that, much ado about nothing. There are worst options, I guess. But nothing moved me. 3/5 crushed beers.

That’s all for now until next time? When is next time? I dunno. Does anyone care to read my dumb opinions? Let us know. Hail and kill!

Talk that talk on our Facebook page. Kyle does vocals for Obscene whose debut cassette ‘Sermon to the Snake’ is available now on Blood Harvest Records.